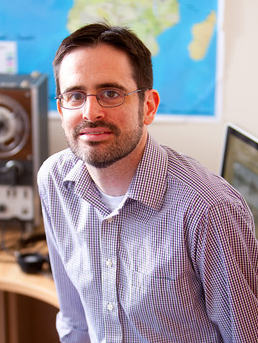 I am an Associate Professor of Linguistics at the University at Buffalo in New York State. I study linguistic diversity with a particular focus on languages of Sub-Saharan Africa. I came to the study of African languages because of a fascination with the variation that can be found in their sounds, words, and sentences, and this has since been augmented by an interest in how languages of the continent reflect and shape Africa’s cultures and history. I presently direct the KPAAM-CAM project which is the “research” side of the efforts being undertaken by the Pig for Pikin project.

I first visited Africa in 2004. I had the good fortune of beginning a postdoctoral fellowship at the Max Planck Institute for Evolutionary Anthropology in Leipzig that year which gave me the opportunity to do research on underdescribed languages in just about any part of the world that I wanted to go to. I chose North West Cameroon. There was still much work to be done there, and its languages were close relatives of languages of the Bantu family, which I had already spent much time doing research on. This part of Africa is also known to be a very nice place to do research, with welcoming people and a pleasant climate.

I had studied the languages of this area from available books and articles, but I didn’t have any personal connection to Cameroon. I planned to arrive there, find a language in need of linguistic documentation, and devote my time to writing a grammar of it. This is a very typical linguistic approach to take, and I didn’t question it. This would be, after all, my first real experience doing linguistic work in the “field”, and I still had a lot to learn. To that point, I had worked on underdescribed languages, but only with speakers who were in the U.S.

However, by my second trip in 2005, I had come to realize something that has since completely altered the course of my research. I had started to work on the Naki language, spoken in several villages by a few thousand people, and I thought this would be my primary language of focus for many years. At the same time, there were many languages spoken near Naki that had hardly any linguistic analysis done on them. I decided to do a survey of them thinking that this information might help future scholars. I had given myself about two weeks to do this survey, which encompassed the speech varieties of eleven villages occupying a region known as Lower Fungom.

As I worked with speakers from each of these villages, I discovered just how different these languages were from each other, and a completely new question emerged: What was it about this place that allowed so many small languages to coexist side-by-side?

This is a research question, but it is one that can only be answered by working closely with the people of Lower Fungom over a long period of time. In some sense, this development project’s origins, therefore, lie in a linguistic puzzle–even if, today, we seem more interested in piglets.